We were delighted to be announced as the winning primary school (8-12 years) in the ‘What’s Your Story’ movie competition for our video “Access Denied” which discussed what we would change about the internet, in particular issues relating to poor broadband, cyber safety and digital age of consent.

Entries to this  video competition to promote online safety, What’s Your Story, have overwhelmingly demonstrated that the Irish youth understand the need for balance in their digital lives. With a record number of entries this year to Trend Micro’s video competition, we were thrilled to be announced as category winners for Primary Schools in Ireland.

Judges of the What’s your Story competition span a diverse range of companies and organisations working in the area of internet safety, media literacy, and technology from organisations like WebWise, Young Irish Film Makers, TY Ireland, ReachOut, Facebook and Twitter.

Also judging the competition, Garry McHugh, Director of Young Irish Film Makers said, “The standard of film making was excellent across the board. The young film makers showed fantastic creativity, strong storytelling and a great sense of humour thrown in. I think we are looking at the next generation of content creators and film makers of Ireland.

Our award winning video can be viewed here –

We have entered “What’s the Story?” digital competition. We had to create and upload a two minute video on the theme “If you could change one thing about your digital life, what would it be?”

We hope you like our new video called ACCESS DENIED!  Winning entries are selected based on a combination of ratings and number of views, as well as scores assigned by a subjective, independent panel of judges.

So get the word out – share  get as many people to view, rate, and comment on it – and increase our chances of winning! 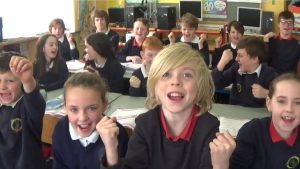 Our latest film as part of the Fís film project written and directed by the children of the school. Hope you enjoy!