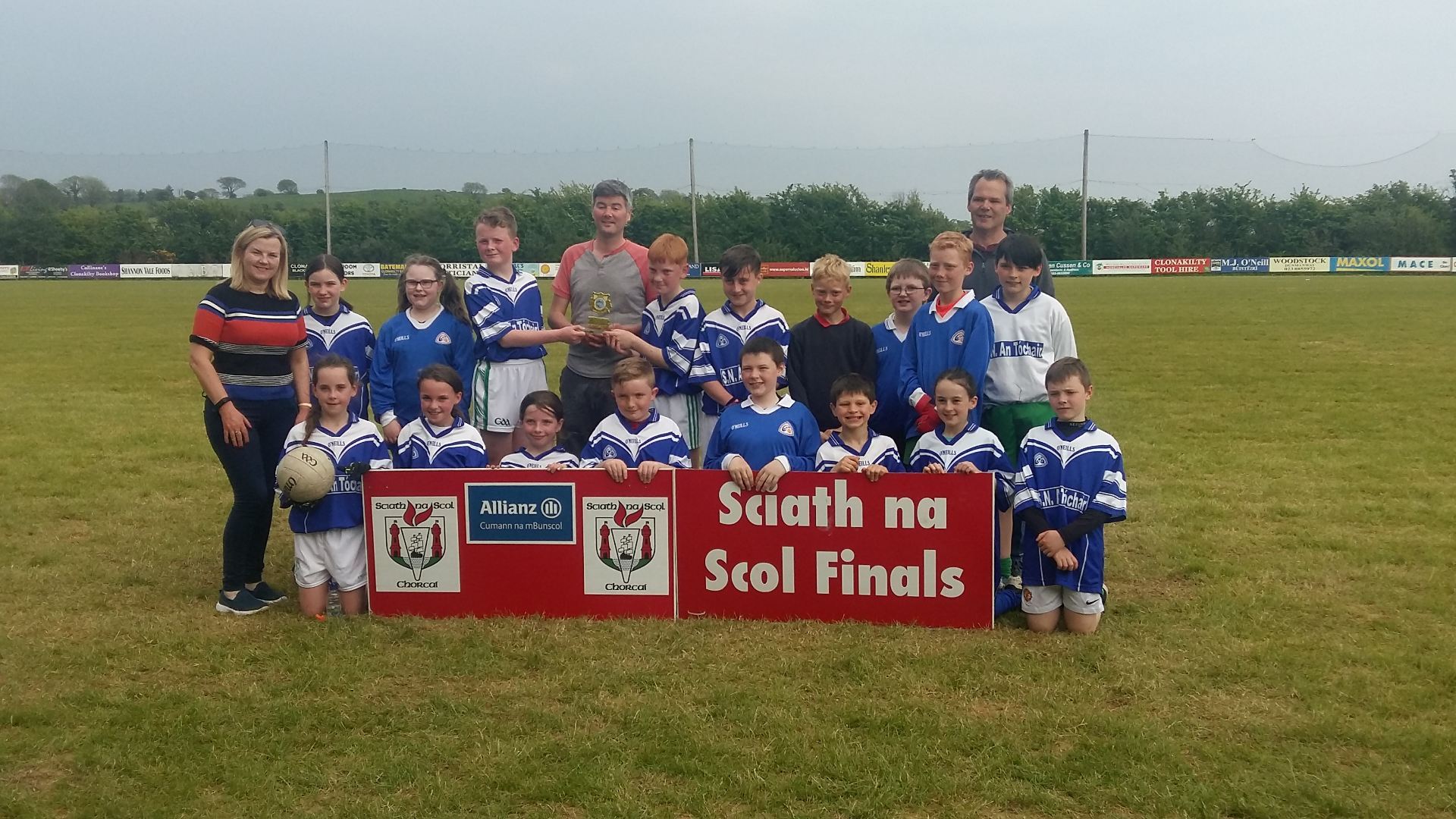 The West Cork Sciath na Scol tournament is all about participation and it is designed to allow schools of all sizes to play on an equal footing and to ensure that as many players as possible enjoy game time. The rules of the game have been adapted to ensure that stronger or more experienced players are prevented from dominating the game and to encourage more teamwork and passing. The finals are always an exciting, colourful event as teams and supporters from all over West Cork arrive to participate in the games or to cheer on their local school.

Togher N.S. played Rathbarry N.S in the final. Rathbarry is a scenic village situated between Clonakilty and Rosscarbery. We had been beaten by Rathbarry in the qualifying tournament and we knew we were in for a tough game. Cheered on by enthusiastic support both teams battled hard in the first half. Rathbarry have some very skillful players and are a very fluid team. Togher were having to work hard to keep them at bay. Some ferocious tackling by Togher and magnificent saves from Luke kept the game in the balance. Both teams were expending huge amounts of energy as they grappled for dominance. Alice and Aoibheann were pressing hard in the front line while Shauna was always on the move as the last line of defence. Muiris kept probing from midfield and his efforts were rewarded with a goal and a point in the first half. Daniel and Thomas were constantly busy putting in tackles and turning defence into attack and some lovely interchanges led to a goal for Thomas. The first half ended with Togher trailing by a point. As the saying goes “goals win games” and that was the story of the second half. Rathbarry were starting to find space and were in for two quick goals which left Togher with a mountain to climb. Togher were determined to go down fighting and rallied with a goal of their own. When Thomas knocked over a free for a point it looked like there was a way back into the game for Togher. Luke was still putting in saves and Alice and Aoibheann were fighting hard to take any opportunities that came their way. As time was running out Daniel, Muiris and Thomas had to focus on attack to turn the game around, while Shauna was left to defensive duties. The Rathbarry defence held firm and with Togher pressing forward the gaps started to open in the Togher defence. A quick passing movement upfield and suddenly Rathbarry were in for another goal. This proved to be the last score of the game. We would like to thank Rathbarry N.S. for a very sporting game. The team is a credit to their parents, school and community. We would also like to thank our own school community for their support during the tournament and the final and of course a huge thank you to Tony Walsh for helping to train the squad.